skip to main | skip to sidebar

Martin Scorsese Is Really Quite A Jovial Fellow

For some reason, I've had a hankering to hear the song "Alma" by Tom Lehrer (as I grow older, fatter and uglier, I for some reason grow more fussy, not less). In my trawls to see what I could find, I stumbled across this excellent article:

Lehrer feels that it is not possible to induce insightful soul searching through humor. "To make [listeners] laugh they have to be somehow insulated and believe that the target is other people, not them. It's mostly about them, whoever the them are." Lehrer's favorite example of this is his song "Wernher von Braun", which is about the divorce of ethics from science. Over the years, Lehrer has "been amused at the number of scientists who have enjoyed the song without realizing it was about them." Lehrer himself hid behind this insulation when he was writing songs. "I'm thinking it's the other guy. I'm thinking 'I'm a good wonderful person, I don't pollute the water.' There's always some rationalization about it that lets you out."

A Minute or Less 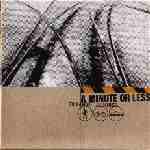 In 1997, Friends of the Earth Fitzroy released the CD A Minute or Less: 78 bands, 78 songs for their sustainable transport campaign, Streets for People. Since the CD is no longer available and its fundraising possibilities likely to be exhausted, I feel relatively guilt free in posting some tracks. However, you may like to bone up on your sustainable transport:
Obligations out of the way, let's have a listen.

The Lucksmiths, $30
At the moment I'd rather have the money, but it's a cute idea. The Lucksmiths have a cripplingly nostalgia-inducing page of old gig flyers on their website, check it out.

The Mabels, Song for Don King
Don King summed up in sixty seconds.

Mal Webb, (What did) future generations (ever do for me?)
Mal Webb is still around doing bad things with former vegetables. He's playing at 303 during November, so check it out.

Clag, Broken Brain
I've got one of those. Download their EP Manufacturing Resent as well.

According to their IUMA listing, Cat Shovel are a side project of Bride of the Atom (who also appear on the compilation), and members have also been involved with Stone Circus, Box the Jesuit and others.

Wank(R) Engine, Boot
I give up - I have no idea who Wank Engine, or even Wank(R) Engine, are. They appear on several Spill compilations, always with sample patchwork. This is a comparatively accessible example.

I'll have some more for you later when my internet connection isn't a slow piece of shit (er, could be a while then).

I'm gonna post a bunch of A Minute Or Less tracks soon, I swear. (Although considering no-one actually visits this site, I guess there's no need to get my knickers in a knot.) In the meantime, here's some crap I just found sitting around:

GG Allin, Bite It You Scum
This is a disappointingly sedate piece of video, but I guess Download.com can hardly show someone covered in their own blood and shit.

Apparently you can't make someone's brains explode by voicing terrible musical opinions. (From indietits.com. Here's one for anyone who's come to this site from Cityflirting.)

What I'm really listening to

Is anyone out there?