skip to main | skip to sidebar

Martin Scorsese Is Really Quite A Jovial Fellow

The Festival Club at Melbourne Fringe is free this year (it used to be free with two ticket stubs from the night's shows or ten bucks), so I headed down after International Talk Like A Pirate Day at "work" (five bucks, all the piss you can drink) and, um, kept drinking. I had to leave before anything interesting happened (related partly to the drinking, and partly to the fact that public transport closes down early in boring ol' M-Town), but before doing so I shelled out $1 for Penny Machinations.

Basically, you pay $1 per show and you enter a tent on the stage. You have the choice of five tents with a different show, and you have to participate to some extent. I chose Pick A Chair, which has two possible variations, Coming and Going. Any of the tents you choose will have up to four possible variations. I'm not sure which I got, but I entered and was confronted with two people pretending to be my parents, wondering when I was going to get a real job like Imaginary Neighbour (they gave this character a name but I'm too drunk to remember), have I got a real job yet, when was I coming home? This was somewhat disconcerting as, whatever problems I have with my parents, they don't hassle me about work. Being drunk, it took me a few goes to realise that I was supposed to participate. I gave them what I could - not much of a Theatresports person, but I have studied screenwriting - and they wrangled it into their act. For one whole dollar it was, um, interesting. I'm hoping to see some other shows when I'm soberer and have my car.

I promised Space Food and here it is. I don't know much about San Hose Cow Musak, not least because their name is spelled differently on different compilations - the one used above is the way it's spelt on the Triantiwontigongolo comp, but it's usually "San Jose Cow Muzak" (or at least, that gets the greatest number of Google hits) and other permutations.

San Jose/Hose Cow Musak/Muzak are included on two Spill compilations, which are entirely available for download. (Their contributions are a cover of the Gilligan's Island theme and of Autobahn, which is disappointingly faithful - nothing to hear here.)

Popemobile - Seventeen
This is a bit of a mid-90s thing, where there was an irritating profusion of people having pop hits because they were under 18 and were therefore supposedly a "prodigy". Of course the music involved was horrendously derivative and would never have charted if it had been by people even five years older. (Actually, I take that back - the mid-90s was a great time for derivative crap in the charts. They just would have been subjected to more vicious competition.)

Dragster - Nothing New
Your pretty indie pop for today.

Some much needed skepticism 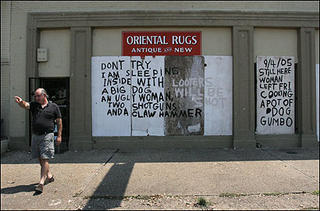 I wasn't going to put up anything about Katrina (Kogelman, my next door neighbour when I was 6), but I found this article at the Boston Globe which I thought was pretty essential, especially since pundits have been crapping on about the Lord of the Flies even before establishing if the stories of looting, rapes and gunfire are true or not. (I'm sure there was crime, of course, but as the Globe article points out, "there are five murders there a week in ''normal" times, among the highest per capita rates in the country".) For those of you who can't be arsed getting a free Globe subscription, here's the most relevant bit:

Are these scholars the equivalent of Donald Rumsfeld when he said television created the appearance of looting in post-invasion Baghdad by running and re-running the same footage of one man stealing an urn? It's possible, but already, as journalists like Howard Witt of the Chicago Tribune and Matt Welch of Reason magazine, have pointed out, many widely reported rumors have proved false or are at least unconfirmed.

''We don't have any substantiated rapes," the New Orleans Police superintendent Edwin Compass told the British newspaper The Guardian, speaking of the situation at the Superdome. Nor have any bodies of victims of foul play turned up there. The Federal Aviation Administration and military officials have cast doubt on the story of the rescue helicopter that came under fire outside Kenner Memorial Hospital on Aug. 31.

Firstly, I want you to consider this article from the Age. Specifically, the following:

Ever since seeing a 50-ish Mick Jagger strutting all over the Wembley stage in the early '90s, Atkinson has been single-mindedly obsessed with achieving his own glittering rock stardom.

From dropping out of university to pursue a musical career, to knocking on record company doors with his acoustic guitar in hand, to posing nude in magazine spreads, Atkinson has done whatever it takes to make it. And it seems like his perseverance, and his adaptability, is beginning to pay off...

Atkinson must have known the line-up of his next band could have some very serious career ramifications, but he denies there was anything calculating in the way he went about recruiting new members.

Luke Potashnik was an old high-school mate Atkinson remembered for his reputation as a guitar wizard, while drummer David Neale was a friend of Luke's and bassist Ben Smyth was recruited through an ad in the paper.

The fact that they were all young and photogenic had absolutely nothing to do with it. Honestly.

"You'll see when we come over (to Australia)," he promises. "Luke is a shit-hot guitarist, and you'll understand the reason I decided to call him up in the first place. As far as the other guys, the number-one criterion was how good a musician they were. That's the reason I went and got all these guys, because they're shit-hot at what they do."

Now, I have no resentment whatsoever of manufactured bands. Some of my favourite music is wholly manufactured rubbish, and looking like you've just been grabbed off the street is no guarantee of authenticity or good music.

Nevertheless, the reason I like Cheap Trick - not love, just warmly like - is not their quintessential all-American soundtrackgenicity (come on, tell me "I Want You To Want Me" doesn't belong in an 80's teen romance flick starring Judge Reinhold) or the fact that Rick Neilsen was slagged by Axl Rose (although that is indeed truly awesome), or the fact that they were in Rock'n'Rule, a fucking totally cool animated movie also featuring the voices of Debbie Harry, Lou Reed & Iggy Pop as a bunch of mice fighting an evil plan to summon a demon to enable rockstar Mok to take over the world. It's this dude.

Ladies and gennelmen, Bun. E. Carlos. He has always looked like that. Actually, I take it back - since this pic was taken, his sartorial instincts have clearly improved.

But how rock is this? The band has at least two conventionally hot looking dudes (at least by some people's standards), they have the quintessential* rock madman Rick "The Dick" Neilsen (again, how cool is it to be slagged off by Axl Rose - it almost guarantees you a long and successful career), and yet in the face of worldwide stardom they have a bespectacled drummer whose pants are pulled up to his chest. Cheap Trick, I salute you.

What I'm really listening to

Is anyone out there?